Church history
St Oswald's Church was mentioned in the Domesday Book, written in 1086, and although the current building has been extended and altered over the years, the roots of the church have been part of the landscape for over 900 years.  That's really quite something - and as you set foot through the doors of our beautiful church, you are walking in the footsteps of generations who have lived in the area and prayed in the church.  It gives you a real sense of connection to something that has stood tall whilst wars raged, governments changed, and the world has become a very different place. 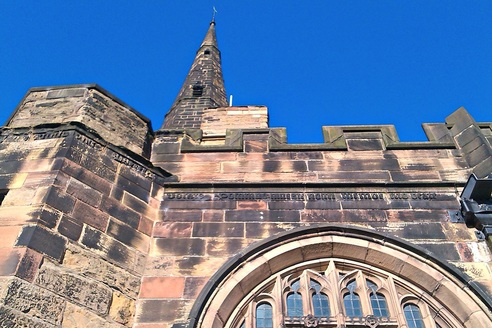 You can find a more detailed list of the Church's structural history here, but here are some of the basic facts: The earliest parts of the church date from the early 13th century and additions were made in 1330 to create the walls of the Legh Chapel and the organ chamber.  The west tower was added in 1358 and the walls and north arcade in 1580.  In 1648, Oliver Cromwell stationed his troops in the church after the Battle of Red Bank and considerable damage was done which was later repaired.  The south porch was added to the building in 1720 and the south arcade of the nave rebuilt using existing stone in 1836.  In 1847-49, the 13th Earl of Derby had the chancel, sanctuary and vestry rebuilt by the English architect, Augustus Pugin.  Architects Paley and Austin from the Lancaster Parternship rebuilt the spire and restored the church in 1869, with the tower being restored in 1931-32 by Paley, who also added a new vestry, porch and entrance.

In more recent times, the Captain of the Titanic, Edward Smith, got married at St Oswald's Church to Sarah Eleanor Pennington 13 January 1887.  Sadly, even being married in our lovely church didn't save his ship from hitting an iceberg and he perished along with over 1,500 others in 1912 when the Titanic sank. 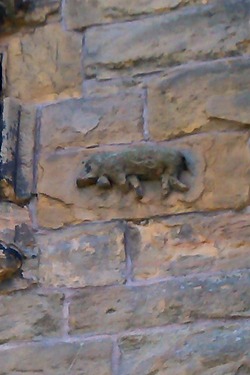 St Oswald's Church also boasts a rather unusual carving of a pig which has it's own story about how the church was sited.  The story goes that the church foundation stone had been laid elsewhere, but at night a pig was seen running to where the church now stands crying "We-ee-wick" and moved the foundation stone to the new place.  This was taken to be a sign that the church was being built in the wrong place and the pig's wishes were carried out.  Our church was built on the hill where it has overlooked the village of Winwick ever since. You can read more about the legend of the Winwick pig here. 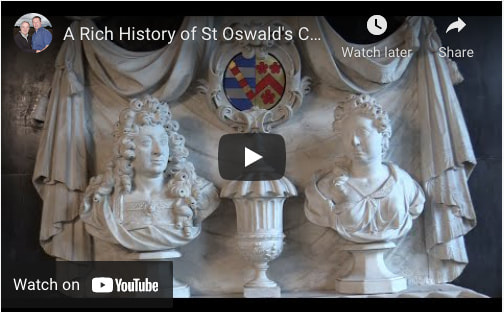 Join James Balme as he explores the history of St Oswald's in this special "Rambles through History" episode.

He takes a look at the evidence and artefacts in our beautiful Church from as early as Anglo-Saxon times and including the Gerard chapel and the Legh chapel dating back to 1330 AD.

He also highlights how the Church suffered during the English Civil War and how the Battle of Red Bank raged to the north of the Church as well as around the Church itself.

The film is complemented with a visual tour of the interior of the Church and many of it's wonderful treasures from centuries past.
Family history (genealogy)
As you can imagine, such an historic church holds records which are useful to people who are researching their family trees.  We are always happy to help out with requests for information whenever we can, but we do ask for a small donation to Church funds to cover the time spent searching through the records.  You can get in touch through our contacts form to make family history enquiries.
Copyright © 2016-2022